The new podcast series Embrace Everything – The World of Gustav MahlerTM, a multi-season exploration of the composer’s complete symphonies, launched with Symphony No. 1 on Tuesday, July 7, 2020.

The Embrace EverythingTM podcast series was created and is hosted by award-winning radio producer Aaron Cohen. It explores and celebrates the music of Gustav Mahler (1860–1911) by taking a journey through his symphonies. Using interviews with leading Mahler interpreters and scholars, readings from the letters of Mahler and his contemporaries, commentary from Mr. Cohen, and the sounds of the symphonies themselves, each season of the series will guide listeners through one of these landmark works in the orchestral repertoire.

Season 1, consisting of 4 episodes, is available on all major streaming platforms. It also aired as a radio program on New York’s WQXR, and radio stations across the United States, the week of July 7, Mahler’s birthday.

Season 1 focuses on Mahler’s Symphony No. 1 in D major (1888), taking listeners back to the work’s origins in the street songs, folk tunes, and bugle calls of Mahler’s childhood. Each of the four episodes is devoted to a movement of the symphony.

Listen to the Season 1 trailer here:

Stream the full episodes below, or wherever you get your podcasts.

Episode 1: Isn’t This a Splendid World?
Gustav Mahler’s First Symphony is the story of a young man beginning his journey through life. Read more »

Episode 2: All Music Proceeds from the Dance
In the second movement of his First Symphony, Gustav Mahler draws upon the dance music of his youth. Read more » 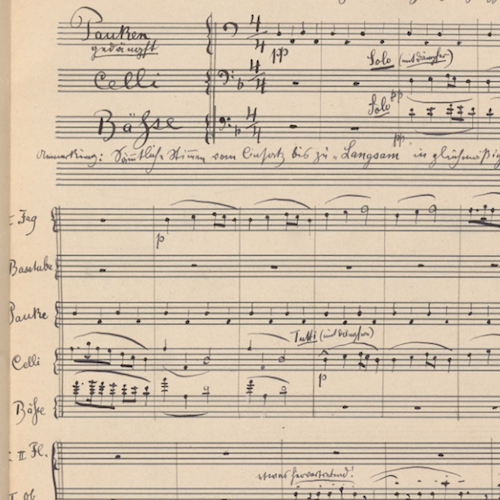 Episode 4: The Battle of Fate
Gustav Mahler originally titled his First Symphony “Titan,” because of the mighty struggle between his hero and fate, a monumental battle that reaches its climax in the fourth movement. Read more »

The Cast of Season 1