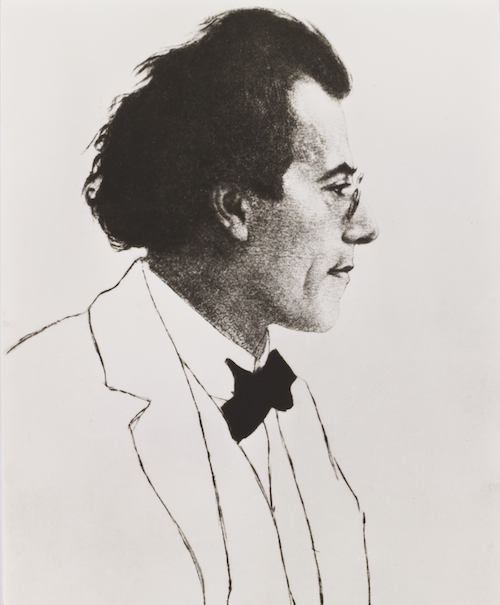 Mahler on one of his regular walks in the countryside
near his summer home in Toblach in 1909.
Photo used with permission.

Gustav Mahler is one of the Titans of classical music. He lived during a time filled with extraordinary personalities, but there was no one quite like Mahler. He was one of the greatest conductors in history. “Demonic” was a word often used to describe both the man and his music making, galvanizing orchestras and opera houses on two continents to previously undreamed-of heights of excellence. At the age of 37 he was appointed Director of Vienna Court Opera, and the 10 years he spent there have become legendary. He then moved to New York, first to the Metropolitan Opera, and then serving as Music Director of the New York Philharmonic. But his triumphs came at an enormous personal cost. He once wrote: “I am thrice homeless, as a native of Bohemia in Austria, as an Austrian among Germans, and as a Jew throughout the world. Everywhere an intruder, never welcomed.”

However, there was another side to Mahler, one not nearly as well known to audiences during his lifetime—Mahler the composer, who was quite overshadowed by Mahler the conductor. The amount of music he composed was actually much smaller than the output of most composers. His reputation rests on just ten symphonies (the last of which is unfinished) and five song cycles for singer and orchestra. Part of the reason for his relatively small output is that Mahler could only compose during the summer when he was not conducting. But part of it is also because of the nature of his compositions—they are enormous, both in length and in the size of the orchestras (and sometimes choruses) needed to perform them. He once told fellow composer Jean Sibelius: “The symphony must be like the world. It must embrace everything.” There is nothing half-way about a piece of music by Gustav Mahler. It is utterly fierce and fearless in its determination to convey everything in Mahler’s soul. Conductor Leonard Bernstein once explained that no other composer goes to quite the emotional extremes as Mahler does. “He is like a child; his feelings are extreme, exaggerated, like young people’s feelings. He was struggling all his life to recapture those pure, unmixed, overflowing emotions of childhood.”

After his untimely death at the age of 50, Mahler’s music began to be played more often and was gaining in popularity, especially in Germany and Austria, but then with the rise of Nazism, it was banned as “degenerate.” It was only after the war that Mahler’s music experienced a renaissance. The advent of long-playing recordings meant his symphonies and song cycles could reach millions of new music lovers. Another factor was conductor Leonard Bernstein, the music director of Mahler’s old orchestra, the New York Philharmonic. In the 1960s, through concerts, recordings, and television, Bernstein was indefatigable in his almost messianic zeal to spread his love of Mahler. By the 1970s Mahler’s music was no longer a rarity. Today Mahler’s once-rarely-heard works have become the inevitable high point of an orchestra’s season, eagerly awaited by musicians and audiences alike.