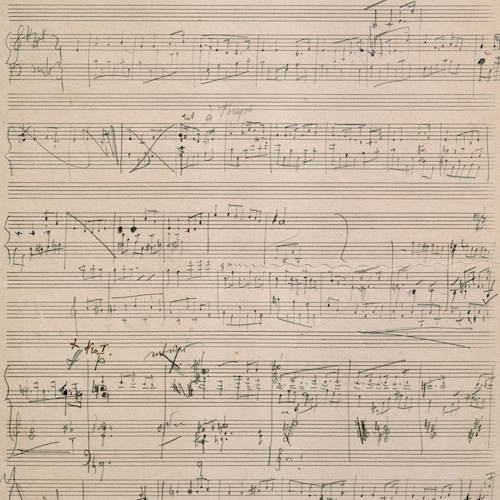 Gustav Mahler. Sketches for Symphony no. 3 in D minor: 1895.
Memorial Library of Music, MLM/8/631.
Courtesy of the Department of Special Collections, Stanford Libraries.

Movement Two
"What the Flowers in the Meadow Tell Me"

In the second movement of his Third Symphony, Gustav Mahler begins the upward journey on the ladder of consciousness. He considers flowers the first step and portrays them in musically charming ways.

Music used in Episode 2. All titles used with permission.

The Nutcracker, Op. 71 - Act 2: Waltz of the Flowers
By Pyotr Ilyich Tchaikovsky
Performed by the Slovak Radio Symphony Orchestra, conducted by Ondrej Lenard
Courtesy of Naxos of America, Inc.
Naxos (8.550515)